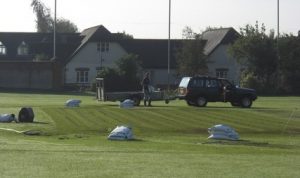 Goatacre Cricket Club now fields 11 teams across the ages from U9’s through to the 4 senior Saturday teams including two girl’s and this season has successfully introduced a new U7’s age group which has been very well attended on the Monday Junior Training Evenings.

The club is tucked away behind the Village Hall in the village of Goatacre and has been in ex-istence since 1928. Recent years have seen some improvements to the facilities including more nets and a new artificial pitch and this year has also seen a further increase in the junior membership. Jon Haines the Junior Section Manager and Club Coach says “The Club is always well attended on Monday evenings, there is always a buzz and it is great to see so many children out enjoying themselves as they play cricket”.
The club is run by volunteers and we are also fortunate to have many helpful parents that help support our efforts from those who make the drinks or do the scoring for games as well as lots of coaches there to support and encourage the children. It is certainly a friendly club and the children make lots of new friends because we attract them from a wide variety of local schools and villages / towns. As well as enjoying the sessions the ability shines through – we have had a number of boys who have represented the district and county but a first for the club came when Helen Dolman (Girls coach) proudly announced at the start of one Monday session that Mia Ridler and Louise Charlesworth-Herbert had made it into the Wiltshire U13 squad with Amelia Glass waiting on the reserve list. In addition Ellie Bissett is on the U12 District Programme (as there is not currently an U12 County squad this year) and will be playing several district matches over the summer. It’s a tremendous effort by the girls and by Helen for her support, for bringing out the best of their abilities. We wish them all the best as they face new challenges.
The club has also recently been inspected to ensure that they adhere to the rigorous require-ments as stipulated in the ECB Clubmark Award and we are also happy to confirm that we passed with flying colours.
To meet the cricket demands of the children, to help busy parents during the summer holidays and to provide some smaller group coaching the Club is hosting a Summer Coaching Course during the week Monday 30 July to Friday 3 August which is open to non-members as well. The cost is £80 for 5 full days and £20 a day for each full day, or £40 for 5 half days and £10 per morning. Bookings will be taken on a first come (including payment) first serve basis, and unfortunately due to coach / children ratios places are limited.
For further information on the summer course or the club please e-mail us at:
goat-acrecc@hotmail.co.uk