Centre of attraction was the newly created mobile skittle alley, allowing the fair goers to try their hand at the age old village custom of ‘bowling for a pig’. Chris Moxey and Peter Addington tied for the prize and the pig was spared as they chose to split the £50 cash alternative. 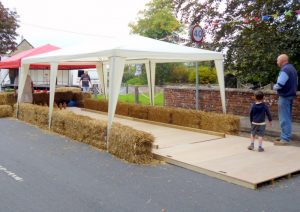 There were face painters, a traditional cider-making presentation, ‘splat the rat’, a ‘Victorian’ photographer, Punch and Judy, toffee apples, a ‘yesteryear’ cake and sweet stall, tombola, kite making, raffle, and local landlord Rob organised an old brewer’s dray serving cask ales and organised a pork roast.
Church Road was officially closed for 24 hours giving the Parishioners of all ages hours of old fashioned fun.
The event was the brainchild of Chairman of the Parish Council Mel Wilkins whose family have lived in the parish for many generations. Mr Wilkins was at pains to say “the event could not have happened if it was not for the enthusiastic support of the many volunteers who planned the event and helped set up the day “.
Surrounded by some of the oldest buildings in Hilmarton, the first street fair for many years in the Parish of Hilmarton, took place over the afternoon and evening of last Saturday.
Nick Edwards, who gave the cider making presentation, said “this is my second visit to Hilmarton Parish and I am very happy to return as I found it to have such a warm and friendly atmosphere”. 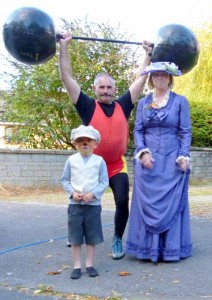 The historic fancy dress competition was won by, a ‘Victorian lady’, Val Procter, a ‘circus strongman’ Jeff Files, and Harry dressed as a ‘little street urchin’.
Although the event was organised as ‘not for profit’ but simply to provide the people of the Parish with a good day out, there was a surplus of £1230 which will go toward the ‘Community Corner’ in St Laurence Church. This planned space will make it much easier for the Parish Church to better support a wide range of community activities.